Today, at Roy Thomson Hall, Music Director Peter Oundjian unveiled the Toronto Symphony Orchestra’s 95th performance season. The offerings reconfirm the TSO’s status as one of Canada’s leading ensembles and outstanding presenters of live music. The TSO is proud to spotlight 58 Canadian artists (48 being guest artists and 10 from within the ranks of the TSO). No less than 33 artists will make their TSO début as part of the 2016/17 season—comprising 55 different programs presented in 102 concerts, and featuring 9 World Premières, 12 TSO Commissions, 2 Canadian Premières, and 18 works by Canadian composers. More World Premières/TSO Commissions will be announced at a later date.

The 2016/17 season—a fusion of genres encompassing future masterworks, hidden gems, and familiar yet relevant masterpieces—is filled with many noteworthy TSO débuts and awaited returns, new commissions, cross-genre performances, exciting collaborations, and, quite simply, music to live and to love. When Canada’s 150th birthday arrives in January 2017, the season will be punctuated with programs and works that pay homage to Canada’s musical riches. Reflecting diversity and originality, the 2016/17 season offers time-honoured classics, novelties, cross-disciplinary events, and partnerships, with music that modulates from one era to another, spanning centuries. Often enhanced by ancillary events such as informative chats, lobby activities, and post-concert parties, TSO concerts become immersive experiences.

“The Toronto Symphony Orchestra strives to be the world’s most innovative orchestra in the world’s most ethnically diverse city,” says TSO President & CEO Jeff Melanson. “We aim to do so through presenting the best artists and artistic works of the present and past. We also seek to engage the diversity and creative potential of our wonderful city. We pull out all the stops to present works that stretch and have stretched us, that redefine what is musically possible. These brilliant works spring forth from the human imagination and express the wide range of human emotion and musical possibility. This next season will be tremendously exciting as we head into Canada’s 150th birthday as a nation in 2017. This is a year full of exploration of the best of what Canada has been, is currently, and will be. As it is with Canada, everyone is welcome on this journey.”

The TSO’s bespoke concert series—including Masterworks, Light Classics, Casual, Exposed, and Special Performances—feature several highlights: Opening Night: Renée Fleming; the continuation of The Decades Project*; an expanded series of Films with Live Orchestra, including the first installment of The Lord of the Rings trilogy; the 13th annual New Creations Festival*, curated by Owen Pallet; the Mozart@261 Festival at Koerner Hall; Canada Mosaic* (and many events to highlight Canada’s Sesquicentennial); and the return of the popular Chinese New Year Celebration*, which will include a new work for pipa and orchestra (World Première/TSO Commission) by Canadian composer Vincent Ho.

Principal Pops Conductor Steven Reineke returns to lead the Pops series, which includes a brand new Christmas show with Canadian songstress Jann Arden; The Music of ABBA with the spectacular Finnish a cappella ensemble, Rajaton; A Tribute to Ella Fitztgerald, starring the dazzling vocalist Capathia Jenkins; and a concert dedicated to the Best of Rodgers & Hammerstein.

Families and youth will enjoy the reprisal of The Hockey Sweater (music by Abigail Richardson-Schulte/story by Roch Carrier, who will be narrating); Lights, Camera…Orchestra!*, an exploration of the magic of movies and music, presented in collaboration with TIFF; and other entertaining events as part of the Young People’s Concert series.

Led by Music Director Peter Oundjian, and joined by some of the world’s greatest soloists in the 2016/17 season, the Orchestra is known as a leading ensemble. Throughout the year, the 88 musicians of the TSO share their exceptional gifts, and continue to inspire and engage musically with their diverse communities.

“With the 2016/17 season, the future of the TSO looks brighter than ever,” says TSO Music Director Peter Oundjian. “A brilliant roster of guest artists along with our unique programming offers something for all the senses. In celebration of the Sesquicentennial of our great nation in 2017, we’re thrilled to be working towards partnerships across Canada and exploring our musical past and the future of great Canadian music. We look forward to experiencing this season with you.” 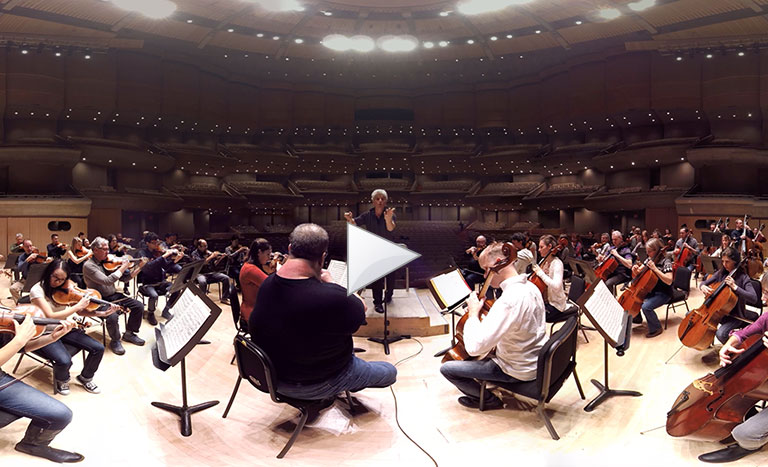 360-degree video: Step on stage with the TSO

THE DECADES PROJECT—In partnership with the AGO
Launched during the 2015/16 season, The Decades Project continues to explore the connections between music and visual art. The concerts are enhanced by performances by The TSO Chamber Soloists, and pre- and post-concert activities (co-curated by Peter Oundjian and Tom Allen) in collaboration with AGO curator, Kenneth Brummel.

Danny Elfman’s Music from the Films of Tim Burton (Oct 29 & 30, 2016)
Throughout their 30-year partnership, visionary Hollywood filmmaker Tim Burton and composer Danny Elfman have created a uniquely magical world. The TSO performs selections from Tim Burton’s films featuring music from Danny Elfman’s iconic film scores, including Batman, Edward Scissorhands, and The Nightmare Before Christmas, as scenes from the movies are projected above the Orchestra.

The Lord of the Rings: The Fellowship of the Ring In Concert (Dec 1, 2 & 3, 2016)
Torontonian Howard Shore’s sweeping, Academy Award–winning score for the first film in director Sir Peter Jackson’s three-picture adaptation of J.R.R. Tolkien’s fantasy classic comes to life when the TSO, a large chorus, and a cast of soloists perform it live to the epic motion picture. This is the first installment of the The Lord of the Rings trilogy.

Disney-Pixar Ratatouille in Concert (Feb 18, 2017)
One of Disney and Pixar’s most enchanting animated fables tells the touching story of a rodent’s quest to become a top Parisian chef. An ideal outing for the entire family, hearing Michael Giacchino’s score performed live by the TSO boosts the film’s charm to a new level. Presentation licensed by Disney Music Publishing and Buena Vista Concerts, a division of ABC Inc. © All rights reserved.

Indiana Jones and the Raiders of the Lost Ark with Live Orchestra (Mar 29, 2017)
Indiana Jones’s screen début takes on a new dimension as the TSO plays John Williams’s score live, under the direction of Steven Reineke.

CANADA MOSAIC (Jan 21, 2017)
In celebration of the 150th anniversary of Canada’s Confederation, the TSO pays tribute to some of the Canadian composers who made our country proud during the mid-to-late 20th century. Alain Trudel conducts works by Ridout, Mercure, Coulthard, and Weinzweig, as well as Rhapsodie romantique by André Mathieu, with Canadian pianist Alain Lefèvre.

More celebratory events and new commissions will be announced as part of Canada’s Sesquicentennial anniversary of Confederation.

MOZART@261 FESTIVAL AT KOERNER HALL—In partnership with the RCM (Jan 11–20, 2017)
The TSO marks the 261st anniversary of Mozart’s birth with six performances—co-curated by the much-admired Mozart specialist Bernard Labadie and Peter Oundjian—which will be presented this year at the intimate TELUS Centre’s Koerner Hall.

From the Prague Symphony to works for small orchestra and grand piano, the Mozart@261 Festival sheds light on the composer’s multi-faceted genius. Highlights include the TSO débuts of 14-year-old Canadian pianist Leonid Nediak and German violinist Isabelle Faust, and the awaited return of pianist Emanuel Ax.

NEW CREATIONS FESTIVAL—CURATED BY OWEN PALLETT (Mar 4–11, 2017)
The TSO’s New Creations Festival, created by Peter Oundjian as he began his Music Directorship in 2004, is emblematic of the TSO’s commitment to creating new works of music, developing tomorrow’s masterworks, and experimenting with the full capacity of the orchestral art form.

Striving for cultural excellence and social innovation, the TSO looks forward to weaving more than music into Toronto’s fabric with new community outreach and education initiatives and innovation platforms, and to providing pre-professional training and talent development through the TSYO. Stay tuned for more announcements and impromptu happenings.

** New staging commissioned by the TSO as part of Canada’s Sesquicentennial anniversary of Confederation.

All artists, programs, dates, prices, and chats are subject to change without notice.

About the TSO: Founded in 1922, the Toronto Symphony Orchestra is one of Canada’s most important cultural institutions, recognized internationally. Music Director Peter Oundjian leads the TSO with a commitment to innovative programming and audience development through a broad range of performances that showcase the exceptional talents of the Orchestra along with a roster of distinguished guest artists and conductors. The TSO also serves the larger community with TSOUNDCHECK, the original under-35 ticket program; the Toronto Symphony Youth Orchestra; and music-education programs that reach tens of thousands of students each year.

The TSO Pops Series Presenting Sponsor is Scotia Wealth Management.
Air Canada is the Official Airline of the TSO.